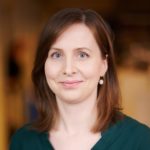 I work as a Marketing Manager at Voyantic. I have been working in B2B marketing for over a decade, first in the Wi-Fi industry and now with RFID. My job is to plan and manage various marketing initiatives and make sure our target audience hears the Voyantic story.

Saturday, Feb 19, 2022, the city of Sparta in Greece witnessed a staggering performance by one of the best female ultrarunners in the world. Finnish ultrarunner Noora Honkala broke four national records in one single run. Her result was all time 3rd in the 12h race global rankings.

The first ever SPARTA CITY ULTRA took place in the Main Street of Sparta, on a two kilometer long loop track. A total of 88 runners participated in the 6h, 12h and 24h races.

Noora started fast by crossing the first marathon at 3:02, and the 50 km at 3:39.32, breaking her first national record. At the 6h mark she had reached 79.00 km, breaking another national record. Not slowing down she passed 100km mark with a time of 7:41.54 (another national record). At this point she was under the world record pace for 12h race. Unfortunately, closing at the 8h mark her stomach started to throw dark skies over her run, forcing her to stop for few times. She tried to keep up the pace but at the 10h mark her stomach forced her to slow down rapidly. Even so Noora held her “slow” pace to the end and finished at 145.400km in 12h — Breaking the 12h national record and putting her the third (3) best performance in all-time world ranking.

Whoever witnessed the race saw a spectacular performance and what ultrarunning is all about. There is plenty more to be seen from Noora!